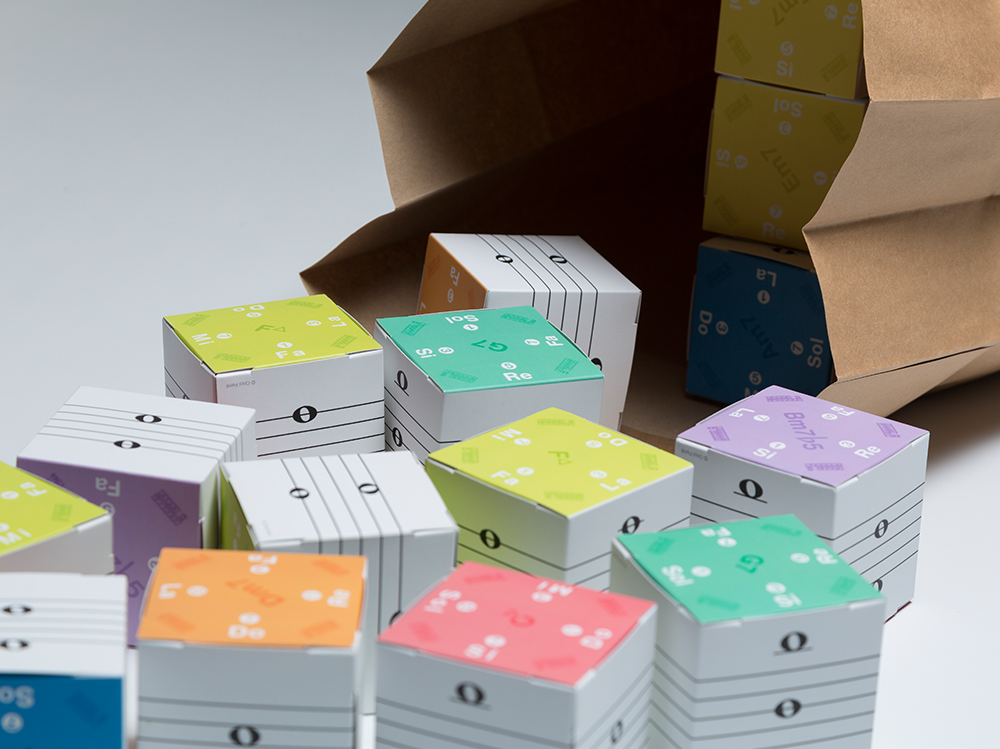 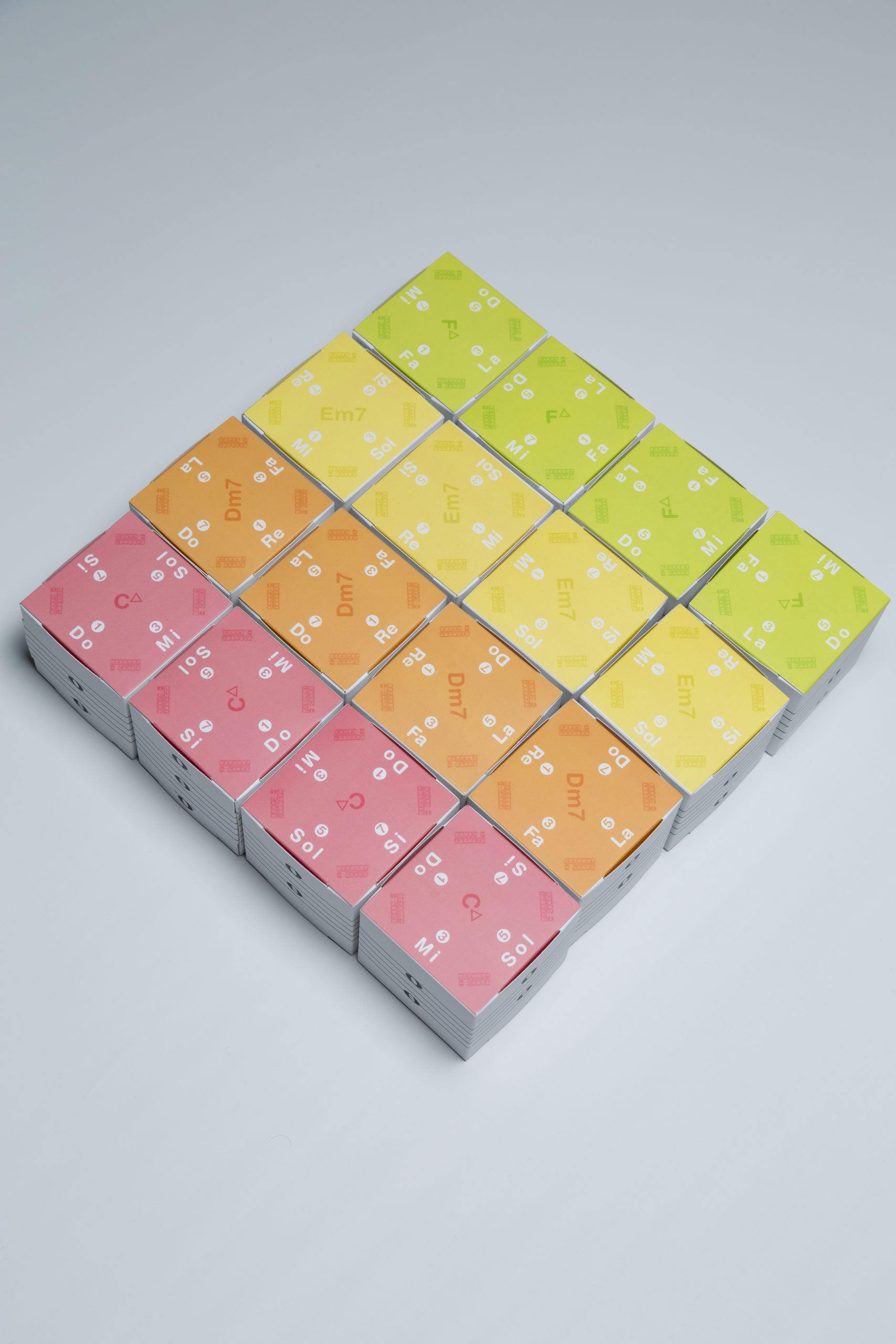 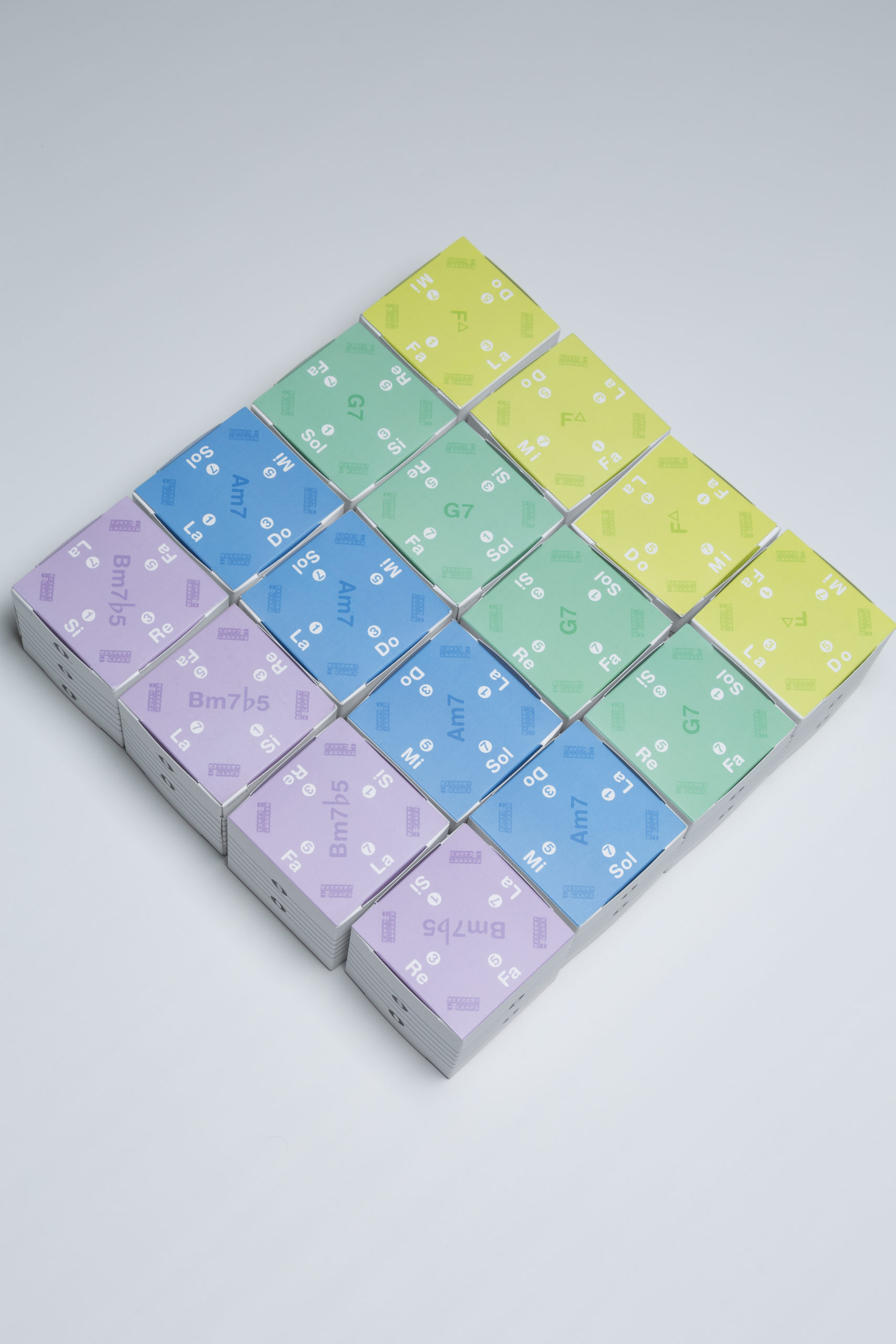 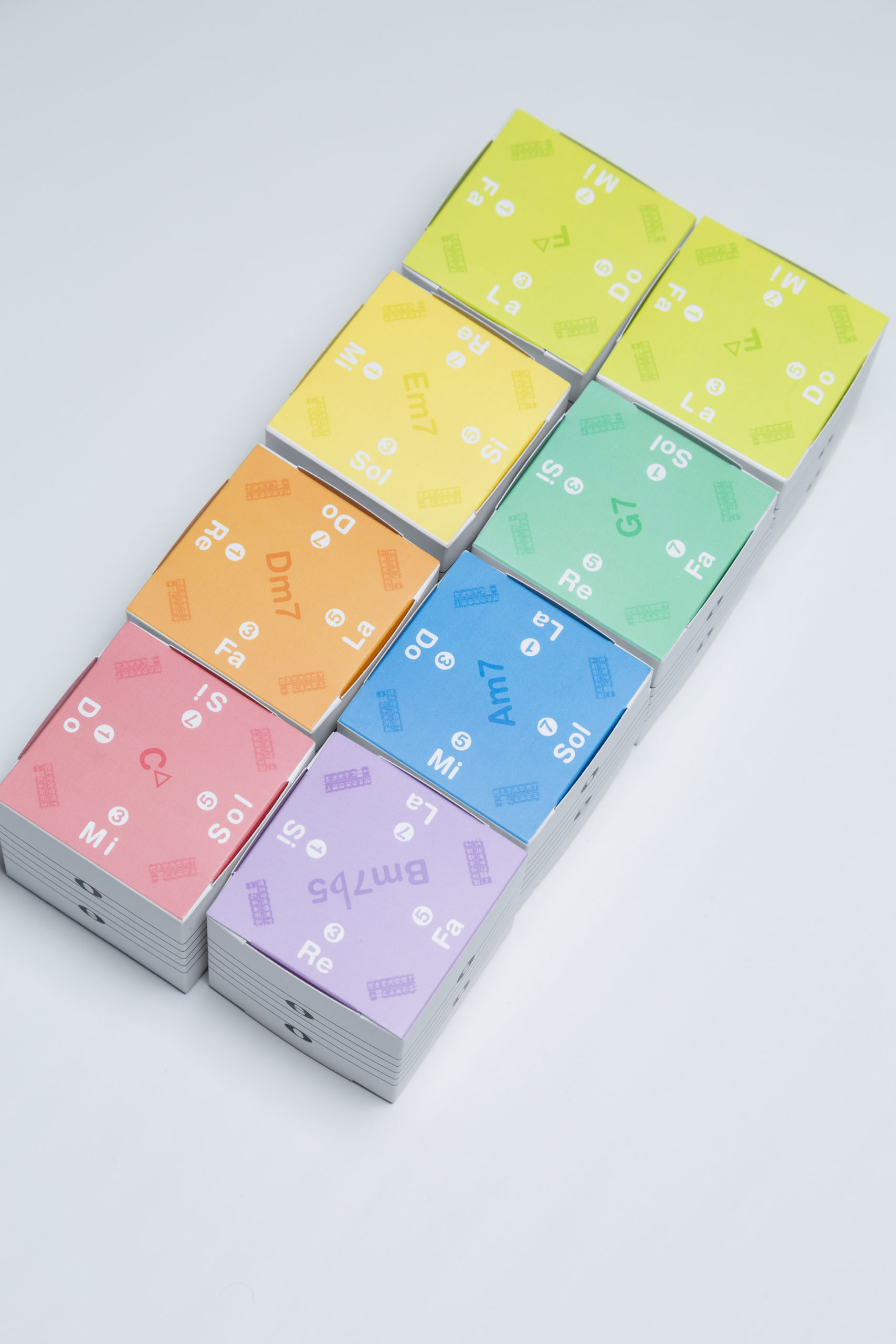 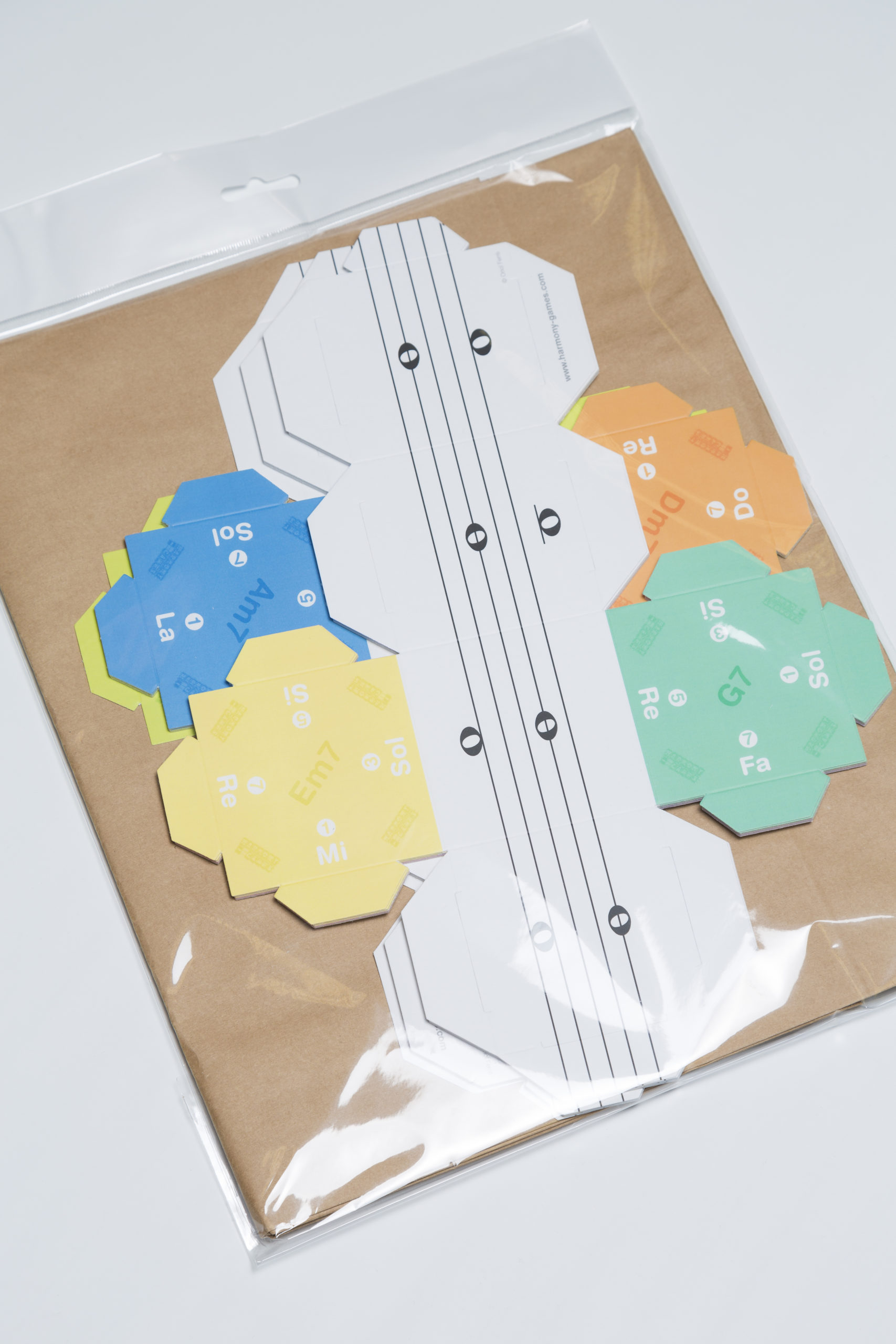 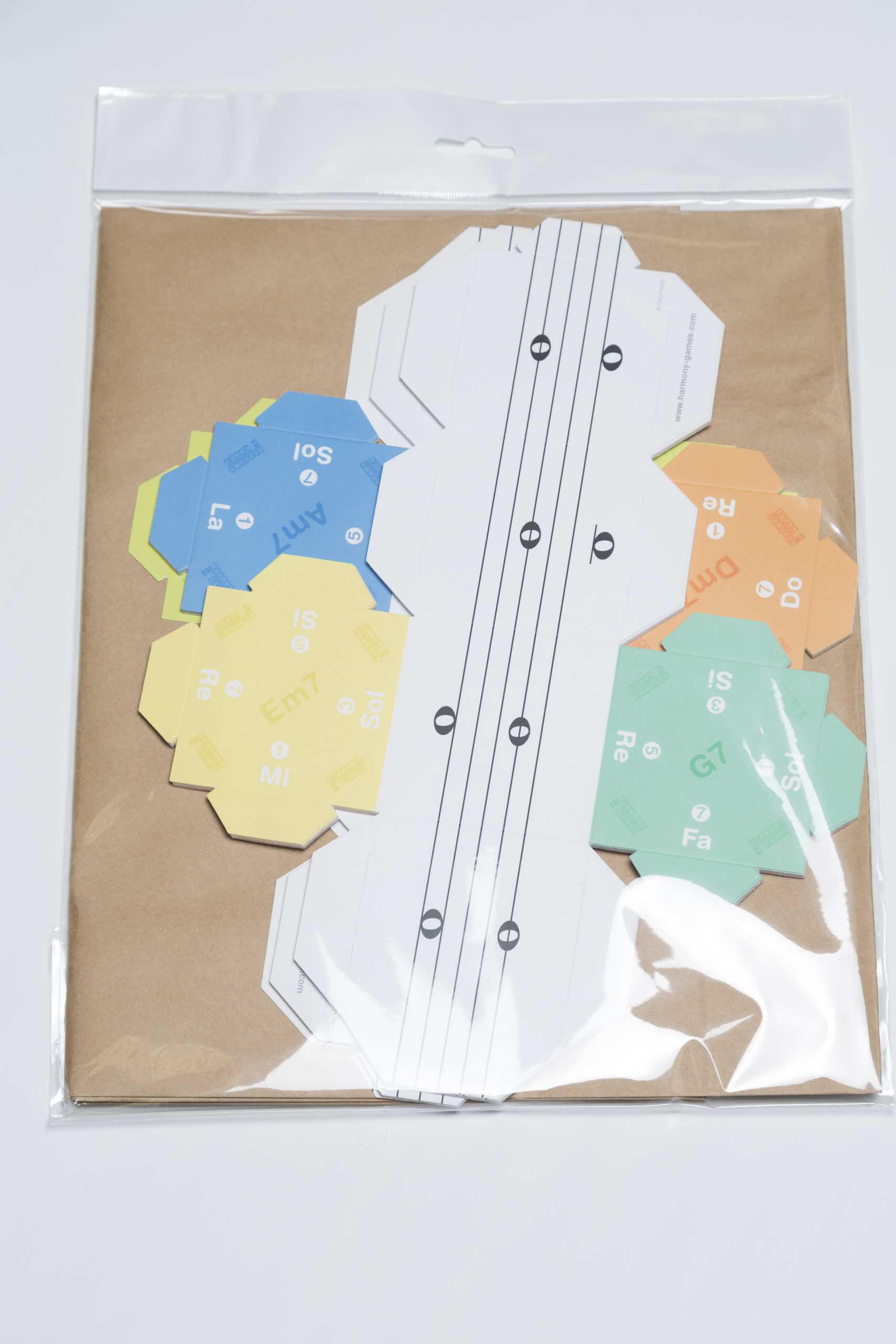 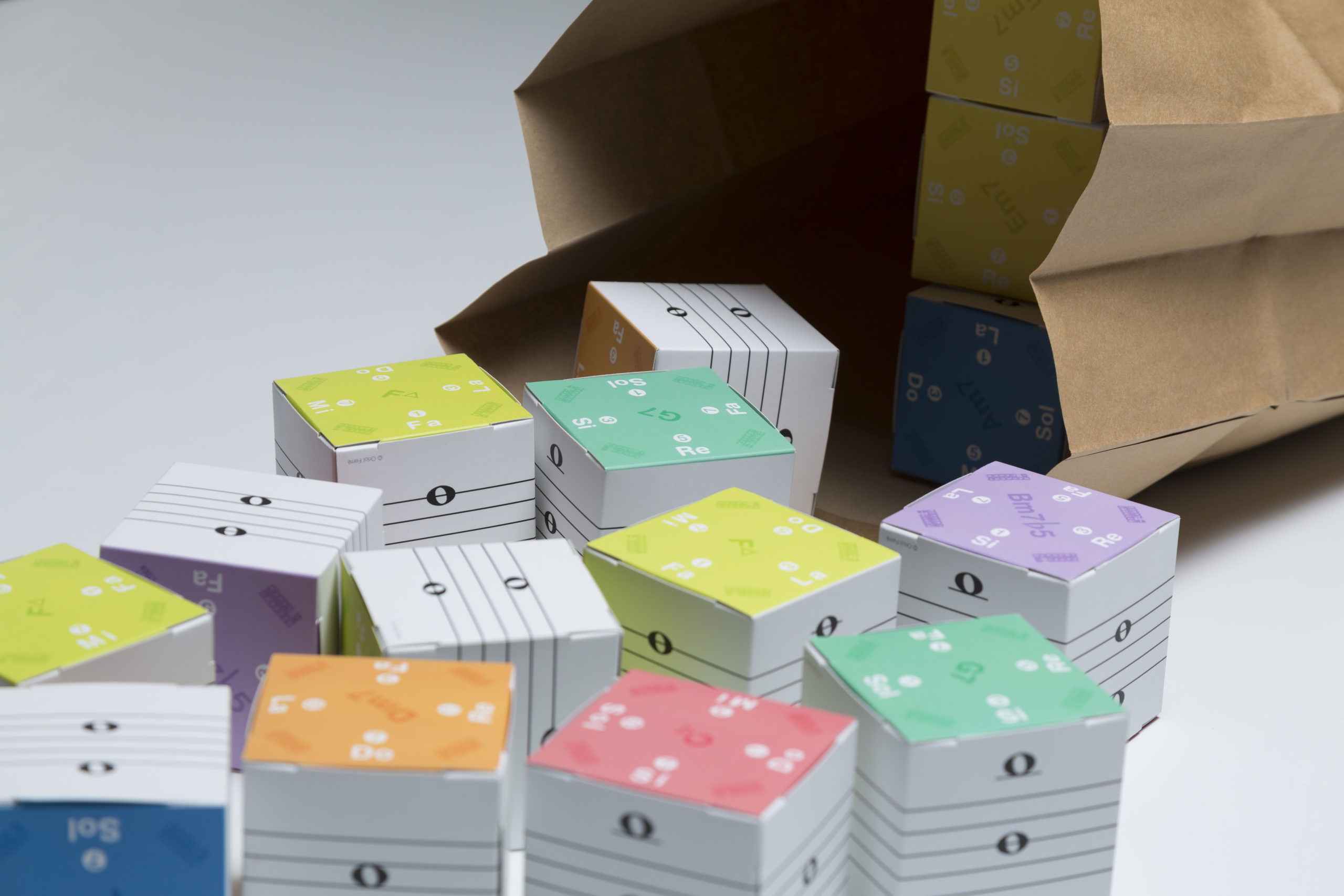 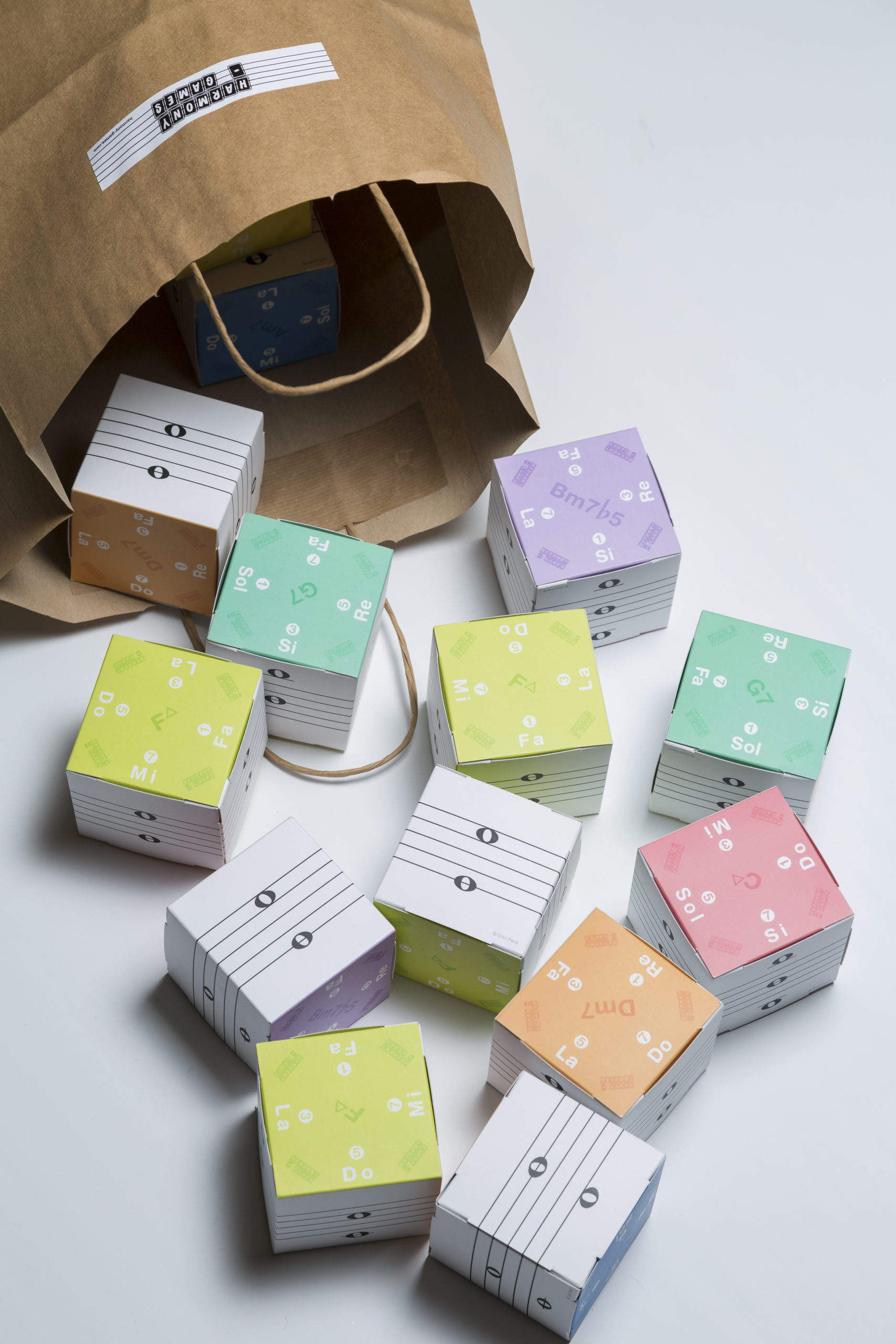 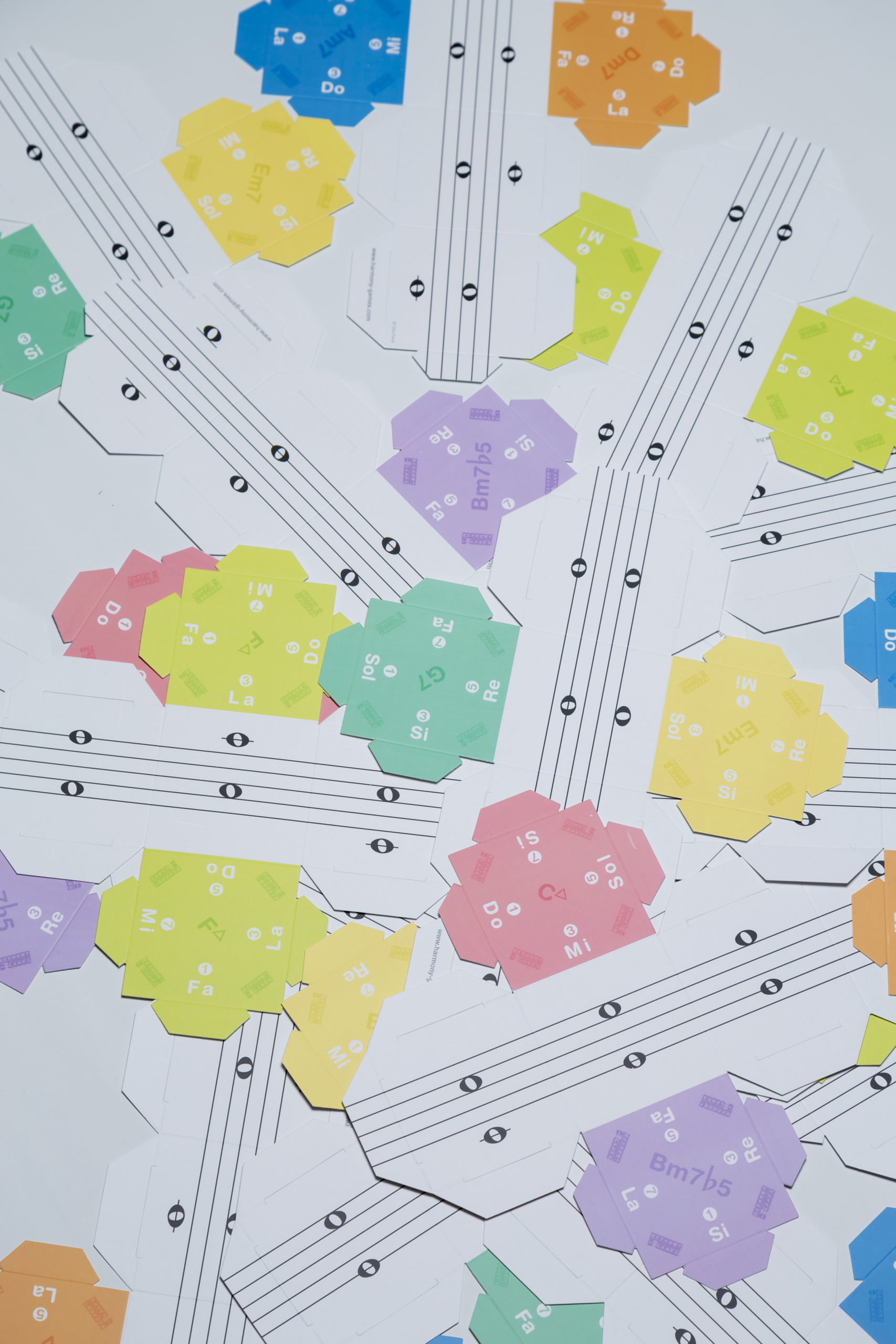 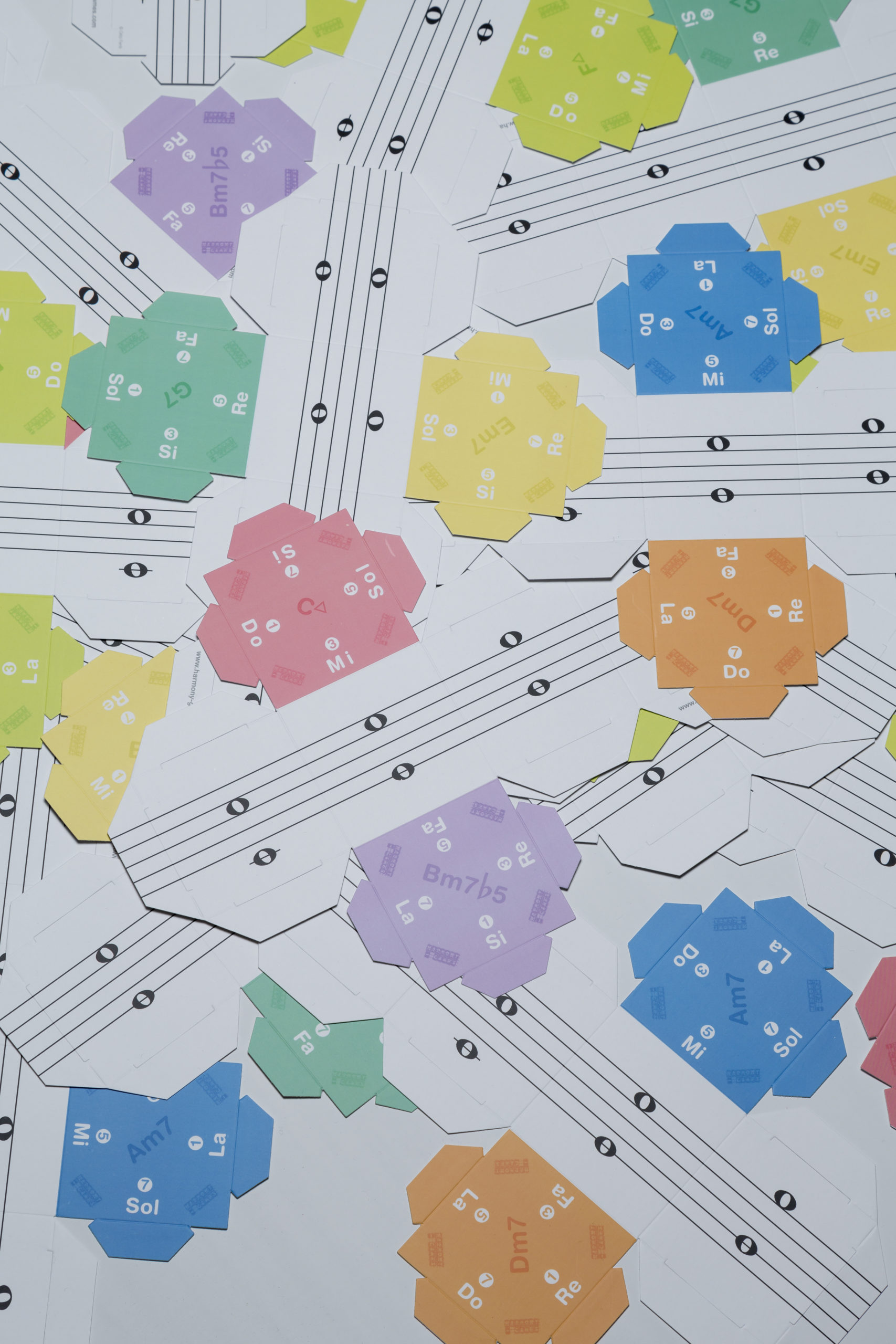 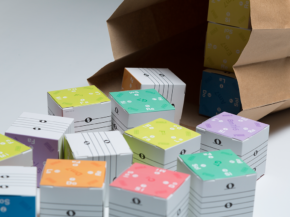 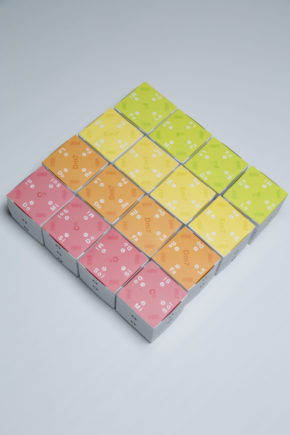 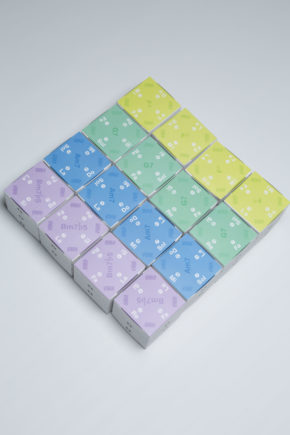 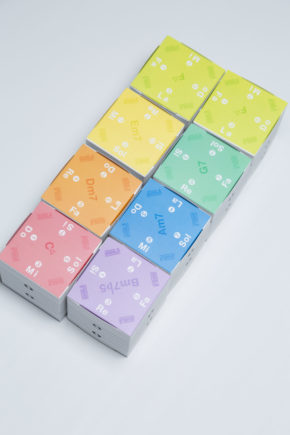 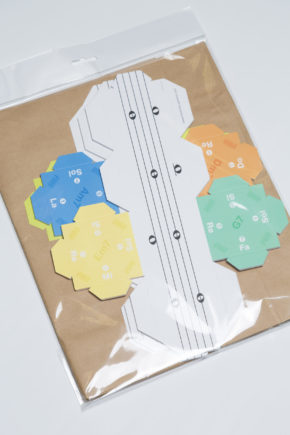 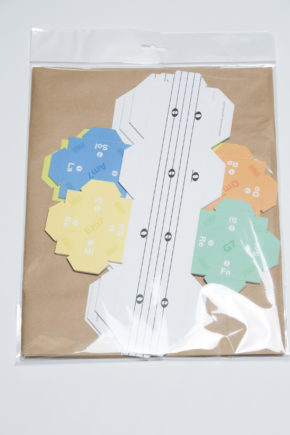 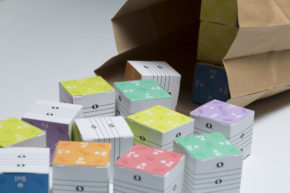 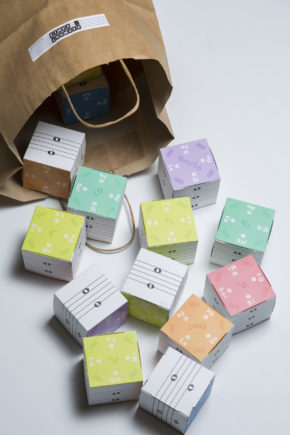 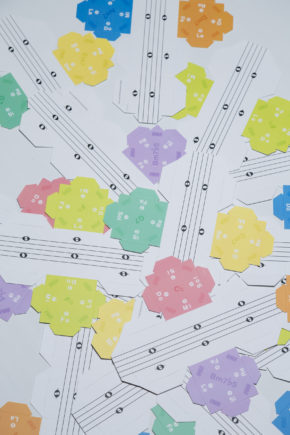 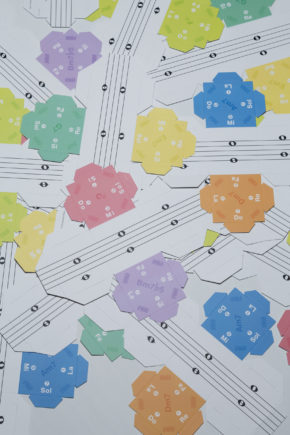 A Collection of 16 musical cubes specially designed to convey how harmony and melody work. In total, there are 4 different cubes (with 4 of each) containing the quadratic chords of the diatonic scale of C major. Mix them together, align them, arrange them … and create your own composition!

Includes a bag to transport them.

One of the distinctive features of Harmonic Cubes is that they all have the same format:

A) Upper face: contains the notation of a particular chord of the diatonic scale of C major. The four notes of the chord (the root, the third, the fifth and the seventh) are located on each of the four sides of the face.
B) Side faces: pentagram with the octave corresponding to the note indicated on the upper face.
C) Lower face: contains the notation of the chord that appears in the staff if the cube is turned.

The collection contains 4 different cubes. Next, we indicate the chords that appear on the top face of each cube and its corresponding chord on the bottom face.

The cubes have been designed with folds that make it easy to put them together. They are packaged in a bag and contain brief instructions.

How they are used

If we place several cubes next to each other (with the root in the same direction), we will see that the pentagram that originates in front contains a small musical composition with the chord that has been chosen.
For example: we choose the four chords of the song ” “No woman no cry”.

If we align the cubes correctly, the octaves with the chord (ie, the bass of the song) should appear on the front staff. Then we can place identical cubes in the same order, but arranged so that the root does not necessarily appear at the front. In the pentagram of this second composition the following notes could be chosen:

These two groups of 4 cubes can be employed in different ways: separately, side by side, or even one above the other. In the specific case of the song “No woman no cry”, as there are no repeated chords, we could have up to four different voices (including the bass).

Harmonic Cubes by Harmony-Games has many possibilities:

A) We can read the compositions establishing different rhythms (or a rhythmic ostinato).
B) We can establish certain movements for each tempo and, instead of singing the note in question, sing the sequence of notes of the arrangement that we have established. Example: 1-3-5-1 of each chord.
C) We can add a second, third or fourth voice (using cubes of the same color). To do this, they must be placed in such a way as to be in coherent harmony with the bass. In this case, you can divide the class into different groups and each one will perform a different voice: singing, in canon, or with instruments.

Harmony Cubes from Harmony-Games: A lot of rhythm springing from cubes!